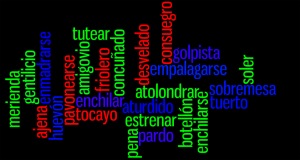 Somehow I got to thinking about Spanish words that don’t translate easily, or lack corresponding concepts in English. The more I thought about it, the more words that came to mind. With the help of a few Google searches to build on the words I already knew, I’ve put together this list, more for entertainment than actual learning, though hopefully you’ll pick up a useful word or two. Some of the words were new to me (botellón, friolero, among others), and others were old favorites. Desvelado, is one of my favorite Spanish words because it captures a certain physical state very well, and it’s sort of surprising we don’t have something similar in English, where the word “tired” spans a huge territory, and is a bit tired itself.

So without further ado, I present for your enjoyment and edification Spanish words with no specific English translation:

Botellón (n)– Open-air drinking session, typically among youths. People bring their own alcohol which is bought from stores, making it a cheap alternative to going to bars or night clubs. More of a Spanish usage than Latin American, though Plaza Garibaldi is the site of many a botellón.

Concuñado (n) — Your brother’s brother-in-law. Though it can be used in the feminine too. Cuñado/a of course being the word for brother-in-law or sister-in-law.

Consuegro (n) – The relationship between people whose children are married to each other. i.e. My father and my father-in-law are consuegros. It’s interesting that in general, English is pretty lacking in familial relationship words. These concepts are generally of much more importance to many other cultures, perhaps more so in cultures driven more by relationships and familial connections than the rules/law-based systems we use in English-speaking countries.

Desvelado (a) — tired, but specifically from having been kept awake or kept from sleeping well the prior night. Estoy desvelado porque el pinche perro del vecino ladraba toda la noche.  You could also be desvelado because you spent the prior night partying. If so, you could be simultaneously desvelado AND crudo. Don’t expect any pity from me.

Empalagarse (v) – to be overcome with sweetness. It the feeling you get when you need some milk to go with that chocolate cake.

Enmadrarse (v) – For a child to become attached excessively to his/her mother.

Enchilar (v) – to be overcome with the heat of chili peppers. This is definitely one you’ll hear often in Mexico, and likely experience yourself. Pablo no pudo hablar porque estuvo enchilado.

Estrenar (v) – To wear or use something for the first time. This is essentially like the verb form of the French début. In Mexico, people will often save new clothes to estrenar at a party or gathering.

Friolero (n) — A person who is especially sensitive to cold weather and temperatures. This one was new for me, but I like it. And I’ll think of it when I walk the streets of Mexico City in January when everyone’s bundled up in down coats, scarves, and mittens for the fifty five-degree mornings. Not to be confused with Molotov’s Frijolero.

Gentilicio (n) — A word to describe the inhabitants of a country or city. A common gentilicio for people from the United States is “American,”  or in Spanish, “Estadounidense.”  For some odd reason, one of my favorite gentlicios is “Guatemalteco.” Don’t ask why. I just think it sounds interesting. Tzurumutarense is also a good one, if a bit of a mouthful.

Golpista (n) — Leader of a military coup. It’s not too surprising that there’s no English equivalent to this word, though there is probably an easy translation into Arabic.

Huevón (n) — Literally translated as “big egg”, but it is better translated as “lazy with a whiff of entitlement”. Here “egg” = balls, but “big balls” is not a compliment, because the implication is that your balls are too big for you to move quickly or effectively. Often used to describe government officials, but can equally apply to lazy gate agents, unattentive store clerks, etc. I’ve never heard this word (or its more feminized equivalent “huevona”) applied to women. It seems to be a male-specific insult, and it’s definitely used often in Mexico.

Pardo (a) – A brownish gray, like the color of an owl.  Once you learn this word, you wonder why we don’t have it in English as it’s a very common color. Mi gata es parda y blanca.

Pavonear (v)– to strut about like a peacock, to be showy and ostentatious.  I remember this word being used to describe Malfoy in the Spanish Translation of the Harry Potter books.

Pena Ajena (n) – Shame experienced on behalf of someone else, even though that person may not feel shame. The opposite of schadenfreude.  So if you knew someone who was mentally ill, and prone to going out in public naked when off his/her meds, you’d likely feel pena ajena for that person.

Puente (n) – A long weekend where you’ve added a day between the weekend and the holiday. So if the holiday is on a Tuesday, and you take Monday off, you’ve made a puente to get a four-day weekend. Mexicans do this all the time.  Hacer puente is the proper usage.

Sobremesa (n) – The time spent after lunch or dinner talking to the people you shared the meal with. What a nice, gracious, civilized word, no? It’s a pity we don’t have an equivalent in English.

Soler (v) — to be in the habit of doing something or accustomed to doing it. Suelo tomar mi café con crema. Unfortunately, that’s hard to do in Mexico as crema for coffee is hard to find.

Tocayo (n) – a person who has the same name as you. So if your name is Steve and your brother-in-law’s name is Steve, he’s your cuñado as well as your tocayo. In Mexico, people seem to be pleased to meet a tocayo, and it’s considered a minor, but special thing. If your name is Carlos, you have lots of tocayos in Mexico.

Tutear (v) – to address someone in the “tu” form vs. the usted form. It’s pretty obvious why we don’t have this in English, with “thee” and “thou” being dead well before even Chaucer’s time.

Tuerto (a) – one-eyed, or blind in one eye.  This one surprised me and made me wonder about the circumstances where it came about. It’s an interesting word, though not one with much currency in the modern world, where glass eyes are generally fitted to those in need.  But if you read a lot of pirate stories in Spanish, this word could prove invaluable.

Amigovia/o (n) — A friend with benefits; a combination of amiga/o and novia/o. Also “un amiga/o con derechos a roce” (a friend with the rights to rub against–where “roce” is from the verb “rozar” to rub against, to touch lightly). This one has a pretty specific translation, but it’s interesting nonetheless. I’ve never heard this one spoken, but then haven’t had the fortune to have many conversations about “friends with benefits” either. But I’ll let you know when I do.

And this is the list. Do you have any to add? Thanks for your comments.

Update (Feb ’14): This has turned into my single most popular post and I get a lot of hits on it from search engines. If you found it this way, you might also enjoy The Hardest Thing to Understand in Spanish is Not What You Think. Saludos!