Fourth in a Series 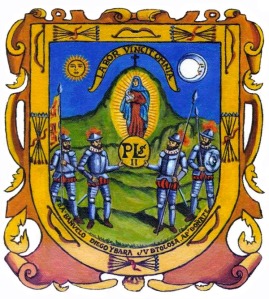 Zacatecas. The very word sounds exotic, foreign, sexy even. Fabulously wealthy from its silver mines in the seventeenth and eighteenth centuries, the city was fabled for its beautiful cantera buildings and its location in a shallow valley between two hills. This was my fantasy of Zacatecas before I had ever thought of going there, and I was not to be disappointed.

We arrived in the early afternoon after a 2-hour bus ride from San Luis Potosí, settled into our hotel, and then went into the Centro to see what was happening. The main street, Calle Hidalgo, was closed off to traffic and filled with people. We quickly found the tourist office (Hidalgo 401) located in a handsome blue building with pink cantera detailing, grabbed a map, and were off to explore. Hidalgo is the main drag, and looks much as it probably did three hundred years ago. All the buildings are baroque colonial style, many totally built of pink cantera, and others with cantera cornices, door and window frames. The street is cobbled, and off in the distance, we could see the famed cathedral. Light, puffy clouds adorned the deep blue sky.

Zacatecas has a long and fascinating history. From Wikipedia: The city had its start as a Spanish mining camp in the mid-16th century. Prior to this, the area’s rich deposits of silver and other minerals were known only to the indigenous people. Due to the wealth that the mines provided, Zacatecas quickly became one of the most important cities in Nueva España, with much of its silver enriching the Spanish crown. At one point, approximately 20% of the silver in Nueva España came from Zacatecas and its surrounding area. The area also saw battles during the turbulent 19th century, but the next major event was the Battle of Zacatecas (1914) during the Mexican Revolution when Francisco Villa took the town, defeating Victoriano Huerta’s much-larger army. This event is still celebrated annually. Today, the city center is a World Heritage Site, [inscribed in 1993]  due to the beautiful Baroque and other structures built during its mining heyday. And mining remains an important industry, employing 21% of the state’s workers. The name Zacatecas is derived from the Zacateco people and has its roots in Nahuatl. The name literally means “people of the grasslands.” And the state is indeed grassy, and semi-desert, not unlike California. Sitting at an altitude of roughly 7,900 feet ASL, the climate is generally cool and refreshing. While we were there, it was perfect shirtsleeve weather during the day, but evenings required a jacket. The city has a population of 132,000, so it’s not a huge place, though it is the state capital. 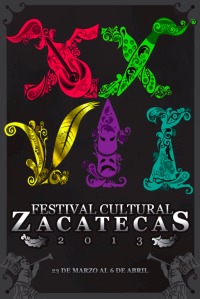 We were fortunate to arrive during the Festival Cultural Zacatecas, which takes place every spring for about ten days bracketing Semana Santa. The festival has been held every year since its inauguration in 1987, and it features a wide range of activities, including free concerts, parades, various festivals, shows, museum exhibits, and other activities.  The city has managed to attract some pretty big names over the years, including Bob Dylan, Gloria Gaynor, Electric Light Orchestra, Il Balleto Di Bronzo, Alberto Cortés, Tania Libertad, the Mexican rock band Jaguares, and Christopher Cross, among others. There are also jazz concerts, classical guitar, and chamber music. These all take place in the Plaza de Armas to the side of the Cathedral. If you go to Zacatecas during this festival, you won’t lack things to do. As I write this post, I realize how little we actually did and saw compared to what was available, despite almost three full days there.

Of course the city is intoxicatingly beautiful. In the Centro, virtually every building is a work of art. All the streets follow the contours of the mountain, so there’s never a particularly long vista down a street. This means that at every turn, there’s an unexpected surprise like a plaza, fountain, church, pedestrian alleyway, or a steep set of stairs leading to who-knows-where. For someone such as myself who loves to take pictures and to breath in the ambiance of a place, it means that it’s very hard to go into a museum and stay there. My instinct in such a place is to try to walk every single street and take in visually as much as I can. 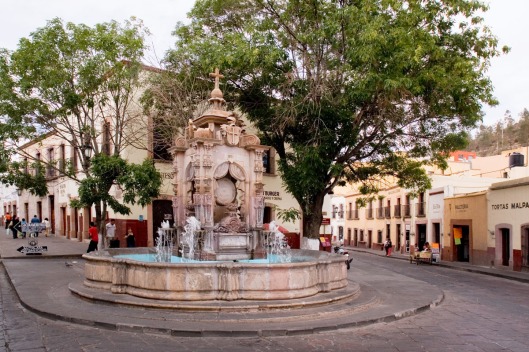 The area of main touristic interest is the old town which lies in the valley between the Cerro de la Bufa to the east and the El Edén mine to the west, and is outlined on the map below. Though a bit hilly, the area is eminently walkable, measuring about a mile and a quarter north-to-south (which is sloping with moderate inclines), and about a quarter mile wide (which can get steep at the edges). It’s worth noting that Zacatecas is nowhere near as steep as either Taxco nor Guanajuato, GTO nor San Francisco, CA. There’s also a Turibus, which is a good way to see the highlights and plan for what you might like to investigate further.

After we left the tourist office, we strolled about a bit on Hidalgo and looked for a good spot to view the Burning of Judas. Or, in the case of Zacatecas, the complete and utter destruction of Judas with fireworks. Hanging by ropes over Hidalgo, the city had put up three or four effigies of Judas, and they were set off in turn. Given that this was Semana Santa of 2013, and the February arrest of Elba Esther Gordillo was still fresh in peoples’ minds, one of the effigies was dedicated to her during the narration, and a lot of jokes were made at her expense. One of the more memorable ones ran along these lines: “Elba Esther has proven, that despite a nearly limitless bank account, money can’t buy beauty.” Though Gordillo had allegedly spent enormous sums on plastic surgery, many would agree with the joke. Certainly the crowd laughed heartily. 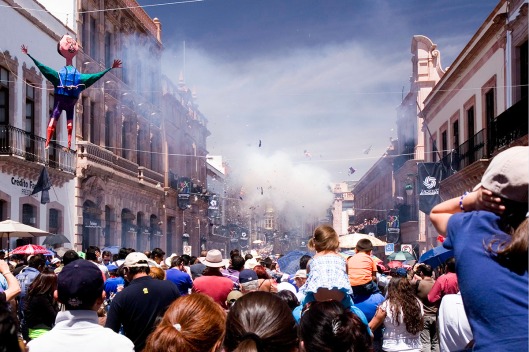 After all the Judases had been immolated, we decided to wander around and see what we could see. We got some nice photos of Hidalgo, looking both north toward the Cathedral and south toward the highway.

Looking North on Hidalgo. Note El Teatro Calderón on the left and the Cathedral 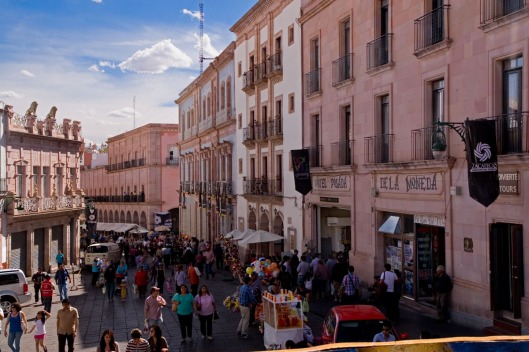 Looking South on Hidalgo. The tourist office is in the blue building just before the arcade.

We also decided to look for lunch. At this point, it was about 3:30, and we were both hungry, a bit tired, and a smidgen (dare I say it?) grumpy.  After what seemed like an interminable walk though various pedestrian-only alleyways, rejecting restaurants right and left (“no one’s in there,” “too busy,” “ugly,” “don’t like the menu”) we finally settled on a chicken restaurant with a good crowd. And judging by our experience there, it would seem that they don’t get too many Gringo tourists in Zacatecas. The owner of the restaurant (which was a decent-sized and popular affair) personally seated us, asked where I was from in particular, and then told us all about the restaurant, how he raised his own chickens, about his kids in the USA, and virtually his life story. It was quite touching, if a bit much. He also personally stopped by several times to make sure we were happy. Needless to say, the service was excellent, and the food was good too.

After lunch, we caught the Turibus and managed to get seats in the open-air upper deck. Unfortunately, I wasn’t able to locate a map of the Turibus route, but it basically passed around the area highlighted on the map above, and took about forty minutes. Not many of the photos taken from the Turibus came out all that well, with the exception of the Museo Francisco Goitia, which sits in the former governor’s mansion, built in 1948 and used as such only through 1962. In 1978, it was converted to a museum to host works by famous Zacatecan artists such as Julio Ruelas, Francisco Goitia, José Kuri Breña, Pedro Coronel, Manuel Felguérez, and Rafael Coronel, among others. It also served as the home of the wealthy aunt in the 2007 movie, Quemar las Naves, which was filmed in Zactecas. Unfortunately we did not see the inside of the museum. 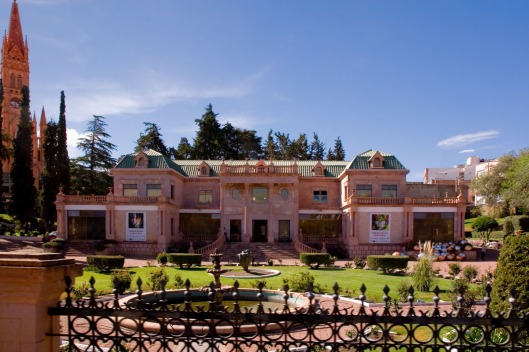 When we got off the Turibus, close to 6:30, we wandered around a bit more, but then I began to feel somewhat “iffy,” so we decided to head back to the hotel for a rest, with plans to return later for dinner and events. But at the hotel, I grew increasingly sick until it was undeniable that something I had had for lunch disagreed with me. Now the weird thing is that F and I ordered the identical dish, a mixed grille. He was fine, but I didn’t want to do anything besides lie in bed. So we spent the rest of the night in our hotel, Fiesta Inn, Zacatecas, on the outskirts of town. We had wanted to stay in town, but by the time we booked, all the Centro hotels were completely sold out. As it turned out, the Fiesta Inn was very nice, about $80 USD, in a brand-new building with a very nice room with a view overlooking the hills. To get to the Centro cost us about $4 USD taxi fare each way, so it turned out to be a decent place to stay. Later, we got to stay in the heart of town.

Obviously, there’s a lot more to say about Zacatecas, so we’ll have another post coming up. For now, Saludos y Buen Viaje!

31 thoughts on “Zacatecas – The Most Magical Mexican Mountain Town?”