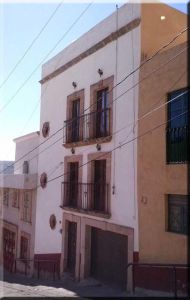 Last year, while in Zacatecas, I was bitten by the real estate bug and came down with a bit of a fever. Or perhaps it was just a relapse of a life-long real estate affliction. You see, everywhere I go in America, I grab the free real estate magazines you find in grocery stores or wherever and pore over them. And I fantasize about renovating and what it would be like to live somewhere else.

I have spent countless hours fantasy real estate shopping in Mexico too. Especially on winter weekends, I often wake up, brew coffee, boot the computer, and while away the day looking at places in Mexico City on metroscubicos.com, all the while fantasizing about a place where I can be in shirtsleeves all year long. Since I broke up with F nearly two years ago, the Mexican symptoms of the affliction have subsided a bit, but not entirely disappeared.  And here in Boston, I don’t fantasize as much since I already have a house which I love, and everything is insanely expensive anyway.

So while in Zacatecas last year on my road trip, I wondered what it would cost to buy a house. In my hotel I googled various real estate sites, browsing properties online, and then found a place that looked nearly perfect. Only about twenty years old, the facade (above) looked as charmingly colonial as anything. Yet it had four bedrooms of decent size, two-and-a-half baths, a good-sized modern (though tired) kitchen, a study off the living room, and even a small two-car garage (end-to-end parking) with an automatic door.  And it was a mere four blocks from the Zócalo, yet on a quiet street. Best of all? It had a roof deck with a magnificent view of the city, a greenhouse, and a laundry room. The price? At the time, $1,550,000 pesos, at the then-current exchange rate (~13.25 MXN/USD) about $117 thousand USD. 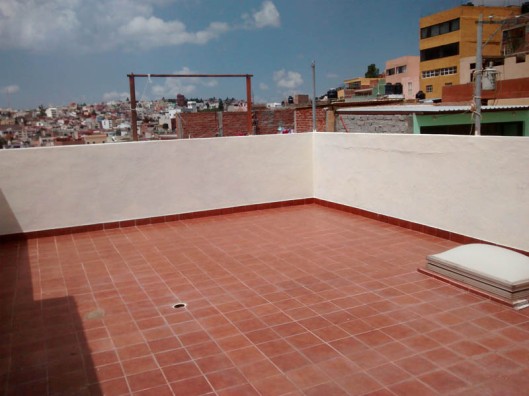 Roof Deck With a Hint of View. If the agent were savvier, she’d post a view shot 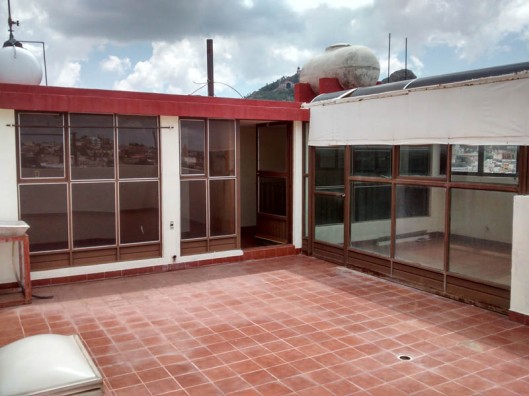 City’s Most Elegant Laundry Room to the Left, Greenhouse to the Right

I emailed the agent to set up an appointment, and she showed me the property the next day. It was in good, but not great shape, and it was clear that the prior owners didn’t share my taste as the paint on the walls clashed with the floors. Still, that was a minor complaint, and overall it was in certainly livable condition. Sure, I’d probably want to re-do the kitchen with its seventies overtones, and fake-wood Formica counters. And the electrical system consisted of a mere two circuit breakers for the entire house. But overall it was a pretty solid place, and at 200 square meters of space (~2200 sq ft), it was spacious, if not over-the-top for a single guy. 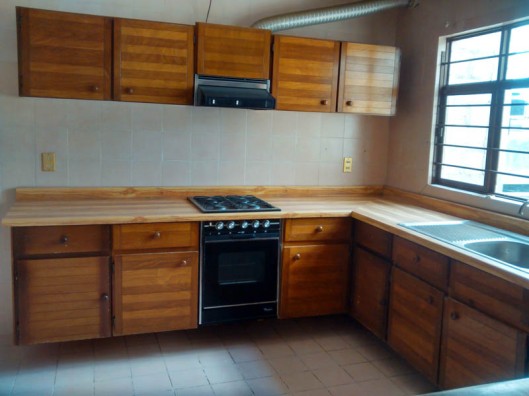 That Seventies Kitchen. Still, it’s a nice size and has good light.

And I half-seriously considered buying it. I love Zacatecas and everything about it. Sitting at 8,100 feet of altitude, it has a warm, dry climate which reminds me of my native California. The sky is an amazing blue with unusually beautiful clouds, and the city itself, at least the historic centro, is probably the most beautiful city in North America. And it’s a UNESCO World Heritage Site to boot. The people are beautiful and friendly, and there are myriad fiestas, parades, clown shows, live theatre, and three excellent museums. Though a small city, it sits midway between Monterrey and Mexico City, about a six hour bus ride for either. 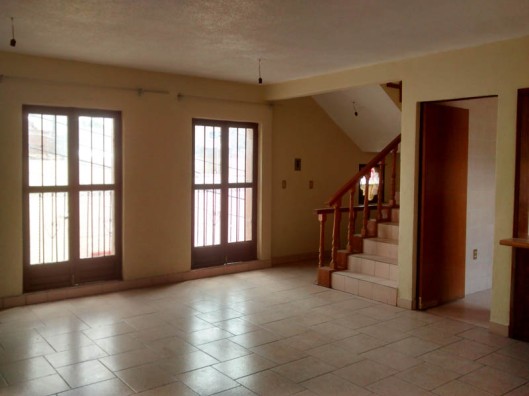 Living Room Looks Over the Street. Wall color must change! 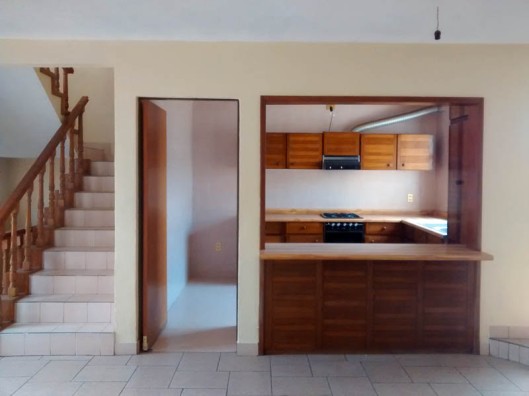 I’m not wild about the kitchen pass-through 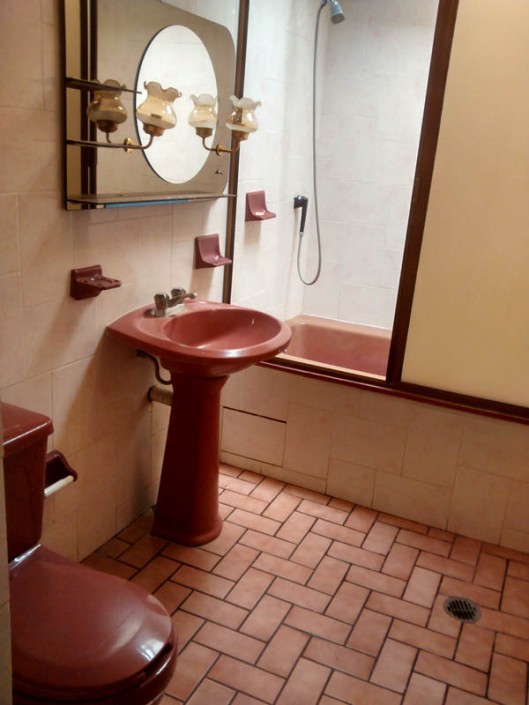 The main bath isn’t bad, but the mirror/light fixture thing MUST go!

After looking at the place for about a half hour and chatting with the realtor about the price, I thanked her and left. The next day I packed up my truck and headed north, back to Boston as my trip was coming to an end. Yet I couldn’t help but fantasize about the house, and after I came home, I’d periodically re-check the listing, hoping it was still available.  Some time over the winter, the listing disappeared, and I assumed that the house had finally sold. I put the thought aside, and went on with my normal, Bostonian life.

Earlier this week, I got an email from Steve Cotton asking, “How go your Mexico move plans?” “Indecisively,” I replied, though with a lot more detail than he probably wanted to read. After I hit “send” on my reply, I really began thinking. I haven’t been back to Mexico since I left in August of last summer. And it feels weird and I miss the country and my friends there. Moreover, I have made zero progress toward either moving there, or really recommitting to Boston. And then today, during a texting chat with Edgar, the topic of Zacatecas came up again. “What the heck?” I thought, so I re-googled Zacatecas real estate, and it was back! The house. For sale by the same realtor, though now, since it still hasn’t sold, they’ve amusingly decided to raise the price by $100,000 pesos asking $1,650,000 MXN. However, in USD terms, it’s actually now slightly cheaper at $105 thousand USD, given the strong appreciation of the dollar in the last year.

So my real estate fantasies are now spinning back at full speed. Financially, I could easily swing the purchase of that house. But the fact that it has been on the market for about a year, possibly longer, makes me think that even the old price was too much. And I can’t possibly believe that the main (or even minor) market for that house is foreigners, so in my mind there’s no possible justification for a price increase. I’m one of the very few foreigners I’ve ever seen in Zacatecas. As for the price, while I’m OK with the idea of a possible, longer-term loss on the house, I don’t want to be underwater the minute the ink on the contract dries. And as I write, the peso is plummeting in the foreign exchange markets, so there’s that risk too.

More importantly, could I actually live in Zacatecas? In some sense, buying a house there would be absolutely nuts. If it’s even the right word, the number of people I “know” in Zacatecas can be counted on one hand: Enrique; David, a gay hairdresser who cut my hair twice on my road trip; Luís, the Chicago-bred but Mexican bellboy I befriended at the hotel where I stayed; and a couple of guys I met along the way. I suppose I could also add the agent, Sandra, to this list too, if only to underscore its tenuousness. So socially, I’d start from approximately zero. As for accessibility, Zacatecas is nowhere near a major airport. It’s a provincial state capital, with only 138,000 people. There’s no expat community. Could I possibly fit in?

David, the hairdresser, provided me some insight on this question while he cut my hair. A native Zacatecano of about forty, he escaped Zacatecas in his younger days and moved to DF which he enjoyed tremendously. But he moved back to Zacatecas a couple years ago as his parents were getting older and he felt he should be closer to them. “The people here are very Catholic,” he told me, rolling his eyes. Very narrow minded. I can’t imagine why you’d want to live here. If it weren’t for my parents, I’d be back in DF. Still, there is one fairly large gay bar in town, and there has been at least one gay pride march there, so I’d not be the only “out” gay in town.

Luis, on the other hand, seemed to be very happy to be out of Chicago, and was loving living in Zacatecas. For him, it was one big party, and he had lots of friends, including a girlfriend. Though he had Mexican and American citizenship, his accent in English was totally American, though oddly African-American ghetto. I suspect that where he grew up in Chicago wasn’t exactly a lovely part of town. So I’m sure that colors his view of Zacatecas.

And the others? They seemed happy enough to be in Zacatecas too.

But for me, it’d be a huge change in lifestyle, with positives and negatives. On the positive side, I’d be much closer to a sort of more urban life, being easily able to swing out to the Zócalo for a coffee break during the day, and wandering out to restaurants at night. Though I live in the city of Boston, I’m in a suburban-like setting on a park, and it’s pretty quiet here during the week. Stores and such are a fifteen-minute walk away, and while nice enough, they’re not exactly World Heritage Site material. Sure, there are plenty of big-city amenities, world-class museums, and the Boston Symphony a subway ride away, but I’m not at all in the thick of things in Boston, which is fine since I love my neighborhood, and have lots of friends here. But a Zacatecan life in that house would be more urban and closer to the city’s main attractions, despite the smaller city size. No yard to care for, a one-minute walk to the center of the city, and tons of festivals and the like within spitting distance all create a sense of urbanity.

I’m totally torn about this house. My impulsive half just wants to buy this place now and start the remodeling. But my practical half, which usually wins these battles, counsels caution. Given the price hike in the face of no sale probably means the seller is unreasonable. I can make a fairly convincing argument that the peso is likely headed lower, especially next year when Mexico’s federal government begins to feel the pinch of lower oil prices and may need to increase borrowings or taxes. (Pemex is hedged through about September, but needs to re-hedge then.) US interest rates are rising, which puts upward pressure on the dollar. And if US rates fall, that’ll be due to a material slowdown in the economy or a recession, which has never been good for the peso.

So where does that leave me? Back in indecision-land without a map. Wish me luck! I’ll need it.

And please do comment. I’d love to get some other perspectives. Saludos!

85 thoughts on “The Ridiculous Real Estate Fantasy of Zacatecas”